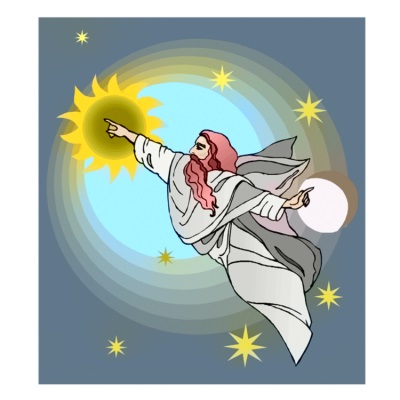 What is commonly known as the Creation days of Genesis occurred over seven literal 24-hour days about 6,000 years ago, according to the chronology of the Bible. Does this not mean that the Earth is only 6,000 years old? No. Many people think the seven creation days in Genesis are a description of the Earth's geologic history. They are not! The geologic record shows that the Earth existed long before the start of Adam's world. This begs the question: If those seven days in the Bible were not the original creation of the heavens and Earth, then what were they? The short answer is: The birth of a new generation of the heavens and Earth. It is an event the Greek Scriptures refer to as: "katabole"

In the King James Version of the Holy Bible there is a key phrase in the New Testament that refers back to the seven days of Genesis. That phrase is, "The foundation of the world" as used in this verse:

That it might be fulfilled which was spoken by the prophet, saying, I will open my mouth in parables; I will utter things which have been kept secret from the foundation of the world." (Matthew 13:35 KJV)

θεμελιος themelios them-el'-ee-os from a derivative of 5087; something put down, i.e. a substruction (of a building, etc.), (literally or figuratively):—foundation.

There is one other place in the Greek Scriptures word katabole is found. In the King James Bible we find this translation of the word:

"Through faith also Sara herself received strength to conceive seed, and was delivered of a child when she was past age, because she judged him faithful who had promised." (Hebrews 11:11 KJV)

"And, Thou, Lord, in the beginning hast laid the foundation of the earth; and the heavens are the works of thine hands:" (Hebrews 1:10 KJV)

In the above verse, the English word "foundation" is NOT from katabole (which is akin to a conception) but it is translated from the Greek word, themelios (which is akin to a structure or base of beginning). This tells us that this verse is describing the time when God originally created the Earth. And, since the verse says this was "in the beginning," it correlates correctly with the very first verse of the Bible:

"In the beginning God created the heaven and the earth." (Genesis 1:1 KJV)

Again, the seven days of Genesis are a description of the "foundation of the world" (the world of man) that was formed by a process called katabole, that is akin to a conception and a birth. Got that? Back in Genesis chapter one the Bible says God "created" the heaven and Earth (Genesis 1:1), but he "made" the heavens (plural) and Earth of the seven-days (Genesis 2:1). "Create" and "made" are two different English words with two different English meanings. They are from two different Hebrew words, (בָּרָא bârâʼ, baw-raw') and (עָשָׂה ʻâsâh, aw-saw') respectively, that have two essentially different meanings:

בָּרָא bârâʼ, baw-raw' =  To create something out of nothing.   עָשָׂה ʻâsâh, aw-saw' =  To make something out of something else.  katabole = make or convert  (the English scientific use=catabolic) as in the term catalytic, like the catalytic converter in your car and what it does.

In simple terms, it refers to a process of breaking something down and making something new as result. In order for a woman to conceive, her body must be able to breakdown the male's sperm in order to incorporate his DNA information (in the sperm's nucleolus) with her DNA (in the egg's cytoplasm) in order to conceive a child which has the DNA characteristics of both the father and mother. This is accomplished through a biochemical process called catabolism. If the female's body no longer produces the necessary hormonal chemistry to initiate this catabolic process, she cannot conceive. That is why Sarah, who was way past child bearing years, was able to conceive because God strengthened her body to do it. That is why the English Bible uses the word "conceive" as a translation of the Greek word katabole, because the English word perfectly describes the end result of a foundational biological process, even though the exact dynamics of that biological process was unknown to man at the time Hebrews 11:11 was penned. This is yet another Biblical example of "Progressive Revelation" of the Scriptures; it was an established scientific truth documented in the Scriptures by the Holy Spirit many hundreds of years before mankind would be able to comprehend the full meaning of what had been written.

Again, in biology, catabolism is generally used in the sense as the precursor to anabolism (the building up) as part of the overall process of metabolism. Once you understand that, then you realize that all those verses in the New Testament which speak of "the foundation (katabole) of the world" are talking about the breaking down (for the purpose of building up) of the new cosmos. That is to say, the Bible compares the "foundation of the world" to this biological process because of the scientific similarities. Specifically, God took the remains of the original heaven and Earth (Genesis 1:1), which had become broken down and were desolate (Genesis 1:2) and through a Divine catabolic process used the remains of the old heaven and Earth to form our present heavens and Earth. Just as the birth of a new human baby is called the start of another generation, the Bible says that the seven-days were another generation:

"These are the generations of the heavens and of the earth when they were created, in the day that the LORD God made the earth and the heavens," (Genesis 2:4 KJV)

Before ending this page, I must give credit to whom it is due for this information:

I first learned about the concept presented on this page after reading a book by D.V.M. Steven E. Dill entitled, "In the Beginnings" a book which is another defense of the Gap Doctrine of Genesis. Dr. Dill contacted me shortly after reading my book and suggested I read his, which I did. In the section in his book entitled, The Gap Theory under the Electron Microscope he expounds at length about the word katabole and the metaphysical connection in typology to the seven days of Genesis. I was blown away after reading it, because it provided yet another Biblical and scientific verification to the Ruin-Reconstruction interpretation that is astounding. I encourage you to read his book because he covers the subject in much greater depth and clarity than I can possibly communicate.

In the next chapter we will discuss the physical and spiritual structure of all things of our current world, from the face of the Earth up to the Third Heaven. We will show how the Holy Temple contains this information in its very design, including the hidden "Sea" between the second and third heavens.

The Firmament, Third Heaven, and Structure of All Things Biblical