More on the 'Windows of Heaven' of Noah's Flood 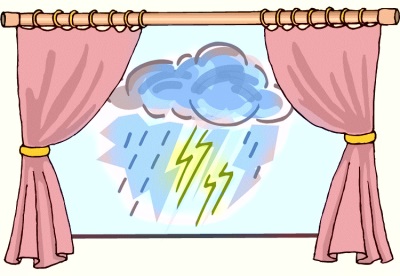 Before we discuss the atmospheric chain reaction that was triggered by the "Fountains of the Deep", and the complexity of the "Windows of Heaven" component of the flood model (Genesis 7:11-12), we need to consider one of the most notable post-flood effects. Specifically, that according to the Bible, the life-spans of mankind dropped almost exponentially following the flood. Obviously, something in the Earth's post-flood environment was very different than before Noah's flood, because before the flood some men lived to be just short of 1,000 years old. Below is a Life Span graph showing the ages of 23 men of the Bible from Adam to Joseph. 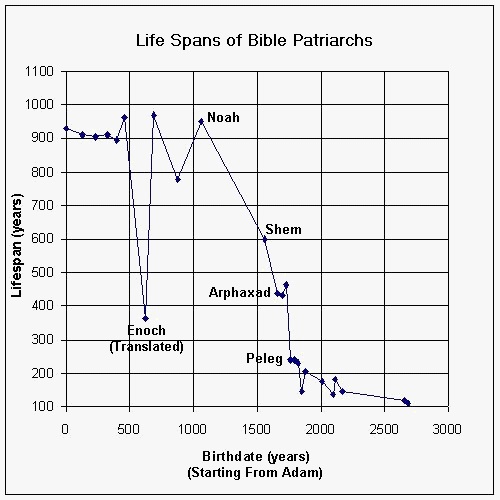 The life spans drop sharply immediately following and during the 101 year interval between the flood event and the significant post-flood event in the days of Peleg. It then slowly levels out to a less steep decline in the days of the Patriarchs of Israel. 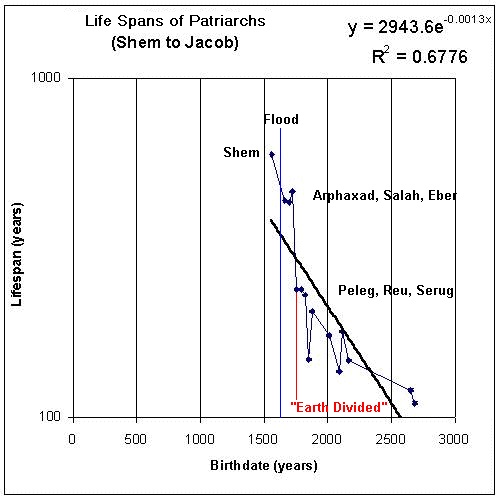 "And unto Eber were born two sons: the name of one was Peleg; for in his days was the earth divided; and his brother's name was Joktan." (Genesis 10:25 KJV)

"And unto Eber were born two sons: the name of the one was Peleg; because in his days the earth was divided: and his brother's name was Joktan." (1 Chronicles 1:19 KJV)

We will discuss the specifics of the days of Peleg in the next chapter.

Many theories have been proposed to scientifically explain the long-life phenomenon of pre-flood man. Possible explanations for the decrease in human life spans after the flood range from an increase in the amount of radiation reaching the Earth's surface to changes in the atmosphere's pressure or composition, or a combination of factors.

Support for this assumption comes from the Bible chronology and the notations of when pre-flood men fathered their first offspring. Observe in the record of the Generations of Adam (Genesis chapter 5) and note the ages of listed men and how old they were when they begat their first children: Seth 105 years, Enos 90 years, Cainan 70 years, Mahalaleel 65 years, Jared 162 years, Enoch 65 years, etc. See that pattern? It tends to indicate that men did not become sexually mature until at least 60 or 70 years of age. And those who had their first children many years past that maturity point (i.e. Jared 162, Methuselah 187, Lamech 182, and Noah 500) probably restrained from procreation for social or religious reasons. The bottom line is that pre-flood men of the age of 50 to 60 years were physiologically equivalent to today's teenagers.

In researching the cause of these greatly expanded pre-flood age-spans, my first inclination was that this must be somehow connected with the functioning of the human pituitary gland. But what was different after the flood that could cause the aging process to accelerate? I considered increased amounts of solar and cosmic radiation in the post-flood world as a possibility, but the existence of C14 in organics dating from the times of Adam and even before him ruled out cosmic radiation. I considered the possibility that perhaps the atmosphere of the Earth back in those days may have filtered out some other form of solar radiation. This could have been part of the answer but did not seem to be enough by itself.

Then, while reading an article about Hyperbaric oxygen (HBO) therapy for treating injuries, a possible answer came in a bolt of inspiration: Could it be that the reason men lived longer in pre-flood days was because the Earth's atmospheric pressure was considerably higher back then and that man was originally made to thrive in a higher-pressure, higher oxygen concentrated atmospheric environment?

In Hyperbaric therapy, a person is placed in a pressurized chamber and the air pressure is increased 1 to 2 times that of normal sea level atmospheric pressure (14.7 psi). Under the increased air pressure more oxygen gets into the bloodstream. This process seems to accelerate healing of wounds, promotes tissue repair, and even favorably affects metabolic rates and the performance of the hormonal systems. In fact, in researching the subject, there appears to be a wide range of medical benefits from living in a pressurized environment. It almost seems to be something that should be natural. So why isn't the world like that today if such conditions are so naturally beneficial? Perhaps before the flood, it was the natural order of things. 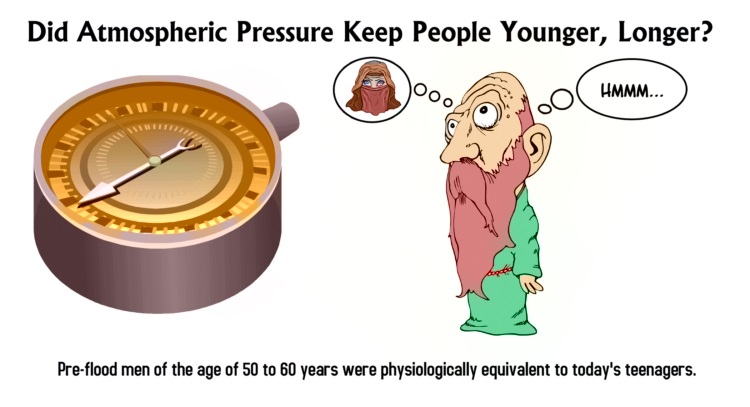 If that was indeed the case, then men and women age quicker and start dying sooner these days because we are living in conditions that are not optimal for our original biological design. If the antediluvian world had a much higher atmospheric pressure, then a large volume of Earth's atmospheric gas has since vanished. How and why? We can assume that the ratio of the various gases in the atmosphere back then was similar to today (i.e. nitrogen 78.1%, oxygen 20.9%, argon 0.9%, carbon dioxide 0.035%, water vapor, and other gases), otherwise the difference in chemical composition would show up in the polar Ice Core measurements. And the temperature dependent ratio of oxygen18 to oxygen16 isotopes would not have been affected by differences in air pressure, to the best of my knowledge. I am unaware of any paleo proxy measurement that could verify the possibility of increased atmospheric pressure on the earth at that time, as compared to today.

Some of our Young Earth Creationist brethren have also reached the conclusion that the antediluvian world had a much higher atmospheric pressure. They also cite the benefits of hyperbaric oxygen as a possible contribution to the longevity of pre-flood mankind. Good for them (every once in a while they get one right), but then they attribute the increased pressure to presence of their mythical "water canopy" that they say God placed above the Earth's atmosphere when He divided the waters (Genesis 1:6) and was the liquid water source for the "windows of heaven" component of the flood. They are wrong on both of those latter assumptions.

What is needed is an antediluvian atmospheric model that, unlike the YEC's "water canopy" assumption, does not violate the laws of physics and can explain how the Earth's atmosphere became reduced in volume.

Since we have no idea what the actual atmospheric pressure could have been back then, let us assume a figure of about 1.5 to 2 atmospheres (14.7 psi X 2 = 29.4 psi). That would be a range in which the hyperbaric benefits would be close to optimum without the effects of nitrogen narcosis or oxygen toxicity (about equal to scuba diving in 25-30 feet of water).

We next need to determine the total weight of the additional atmospheric gas, and in doing the math we find that the present weight of the atmosphere is 4.99 X 1014 tons. Double that and you have the total weight of an additional atmosphere. Of course about 75% of the additional gas would accumulate close to the ground within the lowest 12 -15 kilometers, so the total height of the upper atmosphere's edge would still be close to what it is at present. Although that total tonnage is quite mind-boggling, it only represents about two millionths of the Earth's total mass; the Earth's gravitational pull would be slightly increased, but not by very much.

One possible additional benefit of a thicker atmosphere would be a reduction in the amount of harmful radiation reaching the Earth's surface. Solar radiation is not a simple, single entity. It actually comprises many forms such as electromagnetic radiation, X-rays, gamma rays, and high-speed particles like electrons, protons, neutrons, and atomic nuclei. This factor, combined with the HBO effect, could have been the difference that allowed antediluvian mankind to reach the great ages declared in the Bible. The full verdict is still out on this matter.

We need to address two other issues: 1) How did Noah's family in the Ark and the marine life in the seas escape being fried by the tremendous volume of heat released by the global geyser activity, and 2) How was the atmosphere reduced to present pressure levels? Let us answer the second question first.

When the "fountains" (a belt of geysers along the global oceanic ridge system) began on the Earth, creating the world-wide cloud cover and heavy rains, beginning seven days into the flood sequence, the heat energy from those geysers would have naturally traveled upward as a column. Upon encountering the colder air in the upper atmosphere, the steam would condense and rain would be precipitated. We're talking about rapidly soaring thermal air currents on a massive scale that would also drag heated atmospheric heavy gasses (oxygen - nitrogen, etc.) upwards into the higher elevations, as well. As all this heat accumulated in the upper regions, the sphere of the Earth's atmosphere would expand, pushing outwards and further away from Earth's gravity-well. If through this heating the atmosphere distended enough, portions of it would be ripped from the Earth's gravitational field by the sun's solar winds. Those gases would be lost into space. Consequently, after the flood and after the heat source abated, the upper atmosphere would began to cool and shrink back to more normal size. But with great volumes of atmospheric gasses lost through this process, remaining air pressure at sea level would be reduced to present-day levels.

As for how Noah's family and Earth's marine life survived, they were protected by the dense cloud cover and the heavy rains. For a couple of reasons, the critics are incorrect in arguing that the heat from the geysers would fry everything on the surface of the Earth. First, heated air rises and most of the heat from the geysers would be dissipated high above the Earth's surface. Second, radiant heat (infra-red) from the ascending mix would not travel far horizontally because of the heavy precipitation falling below the cloud cover. That cloud cover would act as a shield from the heat accumulating in the regions above the cloud cover. The rainfall would have been warm, but not overly so.

And at this juncture another important point should be made. All the waters falling from the heavens would have been FRESH WATER. Because salt water is denser than fresh water, a large fresh water "lens" would have formed on top of the saline ocean basins and especially over submerged continental areas. This fact can go a long way in accounting for the survival of fresh-water fish and some forms of vegetation. The Bible says that at least one olive tree survived in the earth and sprouted fresh leaves after the flood waters subsided (see Genesis 8:11). If olive trees could survive those conditions, certainly the old Bristlecone pine trees could as well.

That completes this proposed flood model. Is this a farfetched model? You be the judge. It is only an hypothesis, but meets the requirements of the literal wording of the Bible and does so through the agency of observable scientific principles.

In the next chapter we will discuss the days of Peleg" and the post-flood world.

The Days of Peleg and Historical Changes in Sea Level