The Ancient Earth and the Angels

"In the beginning God created the heaven and the earth." (Genesis 1:1 KJV)

There are two viewpoints on the conditions of the ancient Earth, scientific theory and Scriptural revelation.

Scientists estimate that the age of the planet dates back to about 4.5 billion years ago at the beginning of an obscure geologic time named the Hadean Eon. The name is from the Latin word Hades and is descriptive of what scientists theorized was the state of the Earth when it first formed. The picture on the left side (above) is an artist's conception based on that prevailing theory, that the Earth accreted from rocks and dust orbiting the young sun and that its surface was believed to have been covered by an ocean of magma that eventually cooled. Then, when the planet's surface was cool enough, they theorize that comets crashing into the Earth brought water and formed the planet's oceans.

The chart below shows the history of the Earth as currently interpreted: 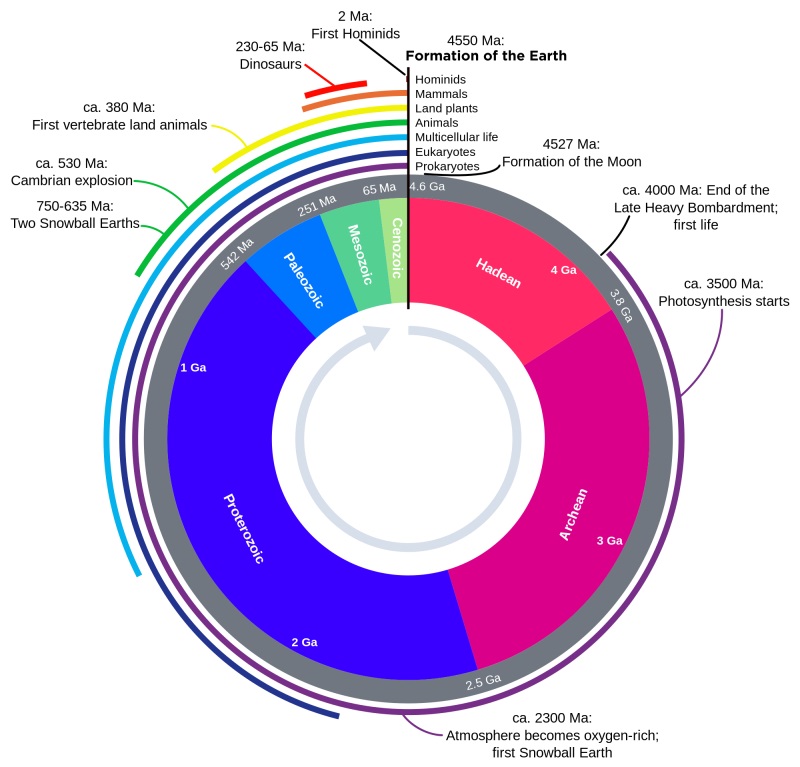 In the Holy Bible, the actual description of the Earth's original creation (Genesis 1:1) is not found in the book of Genesis. It is found in the wisdom book of Job:

"4Where wast thou when I laid the foundations of the earth? declare, if thou hast understanding. 5Who hath laid the measures thereof, if thou knowest? or who hath stretched the line upon it? 6Whereupon are the foundations thereof fastened? or who laid the corner stone thereof; 7When the morning stars sang together, and all the sons of God shouted for joy? 8Or who shut up the sea with doors, when it brake forth, as if it had issued out of the womb? 9When I made the cloud the garment thereof, and thick darkness a swaddlingband for it, 10And brake up for it my decreed place, and set bars and doors, 11And said, Hitherto shalt thou come, but no further: and here shall thy proud waves be stayed?" (Job 38:4-11 KJV)

The Biblical viewpoint says that the Earth's waters emerged from within the planet. Further, the Bible also says that God created the Earth to be inhabited, early on.

"For thus saith the LORD that created the heavens; God himself that formed the earth and made it; he hath established it, he created it not in vain, he formed it to be inhabited: I am the LORD; and there is none else." (Isaiah 45:18 KJV)

The Bible passage in Job reveals that early Earth was created to be inhabited, not by men, but by the Angels. Job 38:4-11 also reveals that the Lord God was not inhabiting eternity alone in those ancient days when He first formed the Earth. Also present are living entities who are figuratively called "the morning stars" that sang and "the sons of God" who shouted. The passage in Job suggests these beings were quite enthusiastic about the result of God's handiwork. That is because these spiritual beings were destined to be the first inhabitants of the ancient Earth. But who or what were they? The Bible identifies them as Princes (see Daniel 10:13, 21 & 12:1) and Angels (see Judges 13:6 & Revelation 21:17) respectively. See detailed information about the Angels, and their relevance to the ancient Earth's history, on our page: The Doctrine of Angels

These are the two conflicting viewpoints in a brief outline. The first, a scientific "theory," says the Earth began as a molten planet which could not support life. The second, a passage from the Holy Scriptures, says it had oceans of water and was habitable, from the beginning.

A Tiny Rock Crystal that Rocked the Scientific Establishment

The great thing about scientific "theories" is the fact that they must be abandoned or modified when a scientific "observation" falsifies a prevailing theory. This is called application of the "Scientific Method" and science is replete with instances where existing theories have been thrown onto the trash heap of discarded notions. 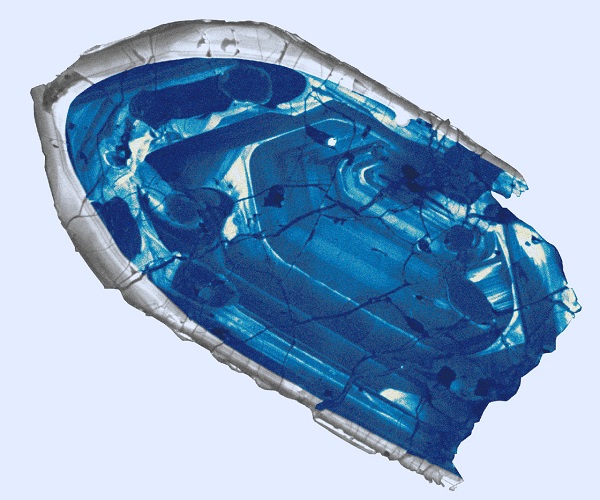 That is exactly what happened when, in 2002, a startling discovery was made that is causing scientists to critically rethink their theories. It was a tiny Zircon crystal inclusion, found in a rock formation in the Jack Hills of Australia. The tiny crystal, hardly as wide as a human hair, presented a Uranium/Lead ratio that dates the formation of the Zircon crystal to about 4.38 billion years ago.

That, in itself, was a stunning enough discovery, but what they learned next rendered a fatal blow to the prevailing theory of Earth's formation. Specifically, a subsequent chemical analysis of that same crystal revealed that it formed 4.38 billion years ago, in LIQUID WATER.

In the previous Bible passage from Job, we are told that liquid water was present from the very beginning of Earth's creation. Both the zircon crystal and the Bible are agreed on this truth. This means the early Earth was not the hellish molten planet that theorists had long presumed. It also destroys the scientific theory that water later came to the Earth from comets. The picture at the top of the page on the right-hand side is an artist's conception of what the Earth my have actually looked like way back when this crystal formed.

The Bible is not a science book, but it can be trusted to be scientifically accurate when it speaks of things concerning science.  In this case, the Bible was ahead of the scientists concerning the truth of the matter. What we have is a passage of Scripture, originally written less than about three-thousand years ago and translated into an English-language Bible just over 400 years ago, well before the infancy of the modern geologic sciences, that reveals truth that scientists are only now discovering. This is called 'Progressive Revelation' and is found in many places in the Bible.

The Spirit also reveals through the Scriptures that a significant event took place on the Earth somewhere back in in Earth's deep-time that profoundly affected the destiny of many of those ancient inhabitants and set in motion both physical and spiritual processes that would change the entire course of created nature. We will discuss this matter in the next chapter.