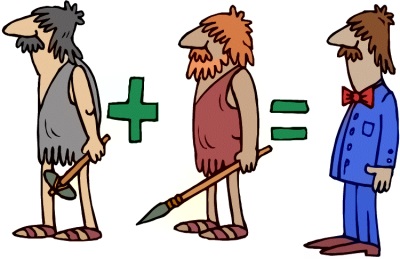 Who and What are the Angels?

"And it came to pass, when men began to multiply on the face of the earth, and daughters were born unto them, That the sons of God saw the daughters of men that they were fair; and they took them wives of all which they chose." (Genesis 6:1-2 KJV)

"There were giants in the earth in those days; and also after that, when the sons of God came in unto the daughters of men, and they bare children to them, the same became mighty men which were of old, men of renown." (Genesis 6:4 KJV)

The subject of Angels is first introduced in the Bible in the above passages in Genesis. Although they are also spoken of directly as "Angels" elsewhere in the entire Bible, they are specifically identified as the "sons of God" in the Old Testament, but not in the New Testament. This can be a bit confusing for those who are unfamiliar with sound doctrine and rightly-dividing the Scriptures.

But who and what are these beings? In the above Scripture verses, these beings are said to have mated with "the daughters of men" back before Noah's Flood and, in so doing, produced male offspring with notable characteristics, specifically gigantism. Further, Genesis 6:4 notes that this was not an isolated incident; that there was a repeat of this behavior sometime after Noah's Flood. And in the prophecies of Daniel, there is an indication that this will occur again in the future:

"And whereas thou sawest iron mixed with miry clay, they shall mingle themselves with the seed of men: but they shall not cleave one to another, even as iron is not mixed with clay."
(Daniel 2:43 KJV)

Taken as a whole, these passage are telling us that these beings called the "sons of God" have in the past, and will again in the future, mate with human women. This Scriptural fact reveals an undeniable truth: Angels, like humans, must have DNA! Therefore, they possess "seed" (Genesis 3:15, Genesis 38:9, Daniel 2:43).

Deoxyribonucleic acid is a thread-like chain of nucleotides carrying the genetic instructions used in the growth, development, functioning and reproduction of all known living organisms and many viruses.

This makes sense because, although the Angels of the Bible are beings of a higher-order than man with powers men do not possess, when they do appear in the flesh (as men) they MUST possess a type of DNA that is compatible with humans, else they could not breed with human women. And this act of procreation between these particular angels and human women was a sin that they will be held accountable for:

"And the angels which kept not their first estate, but left their own habitation, he hath reserved in everlasting chains under darkness unto the judgment of the great day."
(Jude 6 KJV)

We can also reasonably conclude by rightly-dividing Scripture that there are both Good and Evil Angels out there. But where did they come from and what is their proper place of habitation? Let's run the references.

The Angels ("sons of God") are older than antiquity. They were created by God and their abode was with God BEFORE He created the Heaven and Earth:

"Where wast thou when I laid the foundations of the earth? declare, if thou hast understanding. Who hath laid the measures thereof, if thou knowest? or who hath stretched the line upon it? Whereupon are the foundations thereof fastened? or who laid the corner stone thereof; When the morning stars sang together, and all the sons of God shouted for joy?"
(Job 38:4-7 KJV)

And when the Lord God first created the heaven and Earth (Genesis 1:1), the first inhabitants of the Earth were the Angels. The first world on the face of the Earth was made specifically for them. There was no death or entropy in the original creation, it was a place where they could live in the flesh and righteously enjoy the pleasures of Eden, the garden of God. But an event happened that ruined that pristine world and sent the entire course of physical and spiritual nature spiraling into darkness. The details are discussed in detail on this page:  The Reason for Death in "Deep-Time" -the Ancient Origin of Satan, a.k.a. Lucifer

Beyond what we can glean from Isaiah 14:12-16 and Ezekiel 28:13-17, there are few Scriptural details of any activity concerning the Angels and Lucifer over the course of the old Earth's geologic history until Genesis 1:2 where the old Earth is found 'without form and void' and the seven-days regeneration of the heavens and Earth that follows. Did any of the Angels live on the Earth at any times during Earth's geologic ages? We can't know for sure, although there is anecdotal evidence from the fossil records indicating the presence of man-like creatures whose presence are outside of paleological expectations. See the story: Footprint discovery suggests human-like creatures may have roamed Crete nearly 6m years ago

After God created Adam on the sixth-day of Genesis, He commanded the newly created humans (made in God's 'Image') to REPLENISH the Earth (Genesis 1:28). In light of what we do know about the history of the Earth and the Angels, the King James Bible's choice of English wording at Genesis 1:28 is absolutely accurate and correct. Man and the newly regenerated Earth were made to replace the old world which the Bible says was in ruins at the time of Genesis 1:2, roughly about six-thousand years ago according to the Scriptural chronology.

The next time we see indications of the presence of the Angels, after the episode detailed in Genesis chapter six, we find the Angels and Satan appearing before the Lord God.

"Now there was a day when the sons of God came to present themselves before the LORD, and Satan came also among them. And the LORD said unto Satan, Whence comest thou? Then Satan answered the LORD, and said, From going to and fro in the earth, and from walking up and down in it."
(Job 1:6-7 KJV)

It is very apparent that, at least in Old Testament times, both the Angels and Satan had access to both the heavenly realms and the world below. And when the Angels appear to people on the Earth, they always did so in the likeness of men:

"Then the woman came and told her husband, saying, A man of God came unto me, and his countenance was like the countenance of an angel of God, very terrible: but I asked him not whence he was, neither told he me his name:"(Judges 13:6 KJV)

"And entering into the sepulchre, they saw a young man sitting on the right side, clothed in a long white garment; and they were affrighted. And he saith unto them, Be not affrighted: Ye seek Jesus of Nazareth, which was crucified: he is risen; he is not here: behold the place where they laid him."
(Mark 16:5-6 KJV)

"Yea, whiles I was speaking in prayer, even the man Gabriel, whom I had seen in the vision at the beginning, being caused to fly swiftly, touched me about the time of the evening oblation."
(Daniel 9:21 KJV)

The Bible makes clear that Angels and men are very similar in physical appearance:

"And he measured the wall thereof, an hundred and forty and four cubits, according to the measure of a man, that is, of the angel."
(Revelation 21:17 KJV)

Although we are similar to the Angels in image, we are made a little lower in degree. Even when the Lord Jesus Christ became flesh and dwelled with man, He assumed the same lower physical estate of man:

"What is man, that thou art mindful of him? and the son of man, that thou visitest him? For thou hast made him a little lower than the angels, and hast crowned him with glory and honour."
(Psalm 8:4-5 KJV)

"Thou madest him a little lower than the angels; thou crownedst him with glory and honour, and didst set him over the works of thy hands:"
(Hebrews 2:7 KJV)

"But we see Jesus, who was made a little lower than the angels for the suffering of death, crowned with glory and honour; that he by the grace of God should taste death for every man."
(Hebrews 2:9 KJV)

And this brings us to the reason why the Angels are not referred to in the New Testament as the "sons of God" as they are in the Old Testament. The reason? After the death, burial and resurrection of the Lord Jesus Christ, those men and women that are saved and born again will obtain the likeness of the Son of God when they go to be with the Lord. We are already called the "sons of God" according to the Scriptures.

"Behold, what manner of love the Father hath bestowed upon us, that we should be called the sons of God: therefore the world knoweth us not, because it knew him not. Beloved, now are we the sons of God, and it doth not yet appear what we shall be: but we know that, when he shall appear, we shall be like him; for we shall see him as he is."
(1 John 3:1-2 KJV)

"For in the resurrection they neither marry, nor are given in marriage, but are as the angels of God in heaven."
(Matthew 22:30 KJV)

Unlike the once holy Angels that followed Lucifer in his rebellion, did evil and became eternally lost for their sins...

"Then shall he say also unto them on the left hand, Depart from me, ye cursed, into everlasting fire, prepared for the devil and his angels:"
(Matthew 25:41 KJV)

...the descendants of fallen Adam, who was made a little lower than the Angels, hath a Redeemer. And in the Lord Jesus Christ, the second Adam (see: 1 Corinthians 15:45) we now have an inheritance far better than the Angels.

There is so much to learn about Angels and their place in the Biblical picture that it just can't be fully addressed in this short treatment. But, before I close, there are a few more important things you should know. First, even though the "man Gabriel"  was said to "fly swiftly" (Daniel 9:21), Angels DO NOT have WINGS. Even though they can fly (and do a lot of other amazing things), they don't have wings. Yes, I know that religious art across the centuries seems to always depict them as having wings, but that is an unbiblical impression.

There are, however, many real winged living creatures in the Bible. There are things called cherubims and seraphims, some with two wings, four wings or six wings, and some with multiple faces. There is even a vision of two women with the wings of a stork (Zechariah 5:9) , but those are not Angels either. NOWHERE in the Bible is any Angel described as having wings.

Based on what the Bible has to say about Angels, and what the Bible says about our future spiritual bodies, it suggests that, like the Angels in heaven, the new "sons of God" that are the redeemed of mankind will also not have any wings.

So much for some of those old songs and depictions of "Angels" out there. (smile)

For a more detailed study concerning the Angels (the good ones and the bad ones), and amplification of some of the topics just mentioned, go to this page: The Doctrine of Angels

The Chronological Biblical Timeline of Events from Beginning to the End