The 4th Day - Paradox of the Sun and Stars 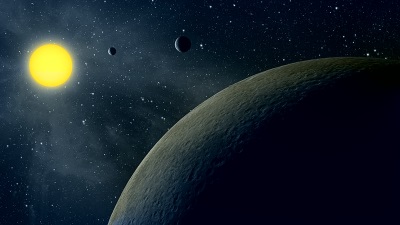 Throughout this website we have sought to provide both Biblical and Scientific answers to the many issues which have evaded the reconciliation of Geology and Genesis and the doctrinal conflict between "Old Earth" and "Young Earth" Creationism. Having demonstrated that the Ruin-Reconstruction (Gap Theory) interpretation provides the superior, Biblically credible solution between what the Bible says and what the Earth's geology reveals, we must now tackle an elusive issue in the reconciliation process: Specifically, the sun, moon and stars of the 4th Day of the Genesis narrative:

Young Earth Creationists claim that the Sun and Stars were first "created" about 6,000 years ago on the 4th Day of Genesis, a claim that runs counter to empirical observations and the Biblical text. In fact, the word "create" is nowhere in the above passage. The word used is "made" and comes from a different Hebrew word with a different meaning. Arguments that "create" and "made" mean the same thing is false, they are different words in both English and Hebrew. They are not interchangeable. The word "made" is correct and its meaning is precisely true. The seven-days of Genesis describe a Divine restructuring of a previously existing heaven and Earth by a process the Greek Scriptures define as katabole (Catabolism). See our page, Catabolism and Regeneration for a detailed analysis.

The constant of the speed of light and observations of our universe suggest that the stars we see up in the sky are old, very old - much older than just 6,000 years. Therefore, in order to defend their Young Earth Creationist doctrine against this widely accepted observation, Young Earth Creationists have proposed every counter-argument imaginable. These arguments range from changes in the speed of light, to time-dilation, to God deliberately making everything appear old just to trick all the "evil evolutionists" into believing the "lies of science" and receiving damnation for their unbelief. Of course, that latter explanation would also make God a liar and a deceiver (Titus 1:2).

In the Genesis Gap Doctrine of Old Earth Creationism, there was a previous world on the ancient Earth long, long before the world of Adam. Of course, such an ancient world had to have a Sun, a Moon and Stars shining up in the sky from ancient times. The Bible says there was a heaven "of old" (2 Peter 3:5-7), so the stars of that heaven had to exist before the seven days of Genesis, otherwise why the requirement for the sun and stars to be regenerated ("made") on the 4th Day? Of course, if we accept that the Lord God "made" the present sun, moon and stars from the remnants of the heavenly bodies that were previously here, then there is an element of truth to the argument that what we now see in the sky is not really as old as scientific theory would have us believe. The scientific observations are based on the assumption of an uninterrupted continuity of all things since the beginning of time. The Bible, however, tells the reader there was indeed an interruption in that continuity. Does that make God a liar? No, not when He clearly tells you in his Word that such an interruption of continuity occurred.

Scientific theory tells us that that when we look up into the sky at any distant star, we are in effect looking backwards into historical time. In theory, when you look at a star that one-million light years away, you are seeing what that star looked like one-million years ago in time. In reality, that star may no longer be there. It could have exploded 500,000 years ago and you would not see that from Earth for another 500,000 years from today. Light travels at a velocity of 299,792,458 m/s and the distances between the Earth and the stars is measured in light-years.

In several places within this website we present our evidence that indicates the old Earth and heavens perished when they passed into a state of coldness and ruin about 13,000 - 10,000 radio carbon years ago. This is at a geological marker termed the Younger-Dryas cooling event that occurred at the end of the Pleistocene. The Earth went cold when the stars in the heavens went dark and cold. In the process, the hydrogen gas of the stars would have been converted to vast quantities of water. (See "Recipe for water: Just add starlight" for details of the process) That was the source of the waters of the "deep" (the abyss of the cosmos) that overflowed the Earth (Genesis 1:2). Such an event would have produced a spectacular light show across the heavens (stars expanding into Red Giants and imploding into White Dwarfs, etc.) before the darkness and cold settled in and eventually killed everything on the Earth.

This brings us to the Paradox: But when we look up into the heavens today everything appears normal, as if nothing of the sort even happened. Why is that? It is because of a Divine intervention into the workings of the cosmos about 6,000 years ago. The reader should keep firmly in mind that the Lord God who established the observed physical laws of nature is not Himself in subjection to those laws. Our Bible is replete with instances where the Lord God supernaturally intervenes against the laws of physics and nature. Examples are the parting of the Red Sea (Exodus 14:21), the turning back of the shadow of the sundial (2 Kings 20:9), the stopping of the earth's rotation for about 24 hours (Joshua 10:12-14), the virgin birth of the God-Man, the Lord Jesus Christ. And then, of course, there is the resurrection of the Lord Jesus Christ from the dead. Do you believe that God did all these things? Then why should you find it incredible that the Lord God could not resurrect an entire dead universe and give it renewed life? The Lord Jesus Christ raised Lazarus from the dead and restored him whole, even after his body had been decomposing in the grave for four days (John 11:39). Could not the Lord Jesus Christ, who is the maker of all things (John 1:3), restore a dead universe and make it whole again? Most certainly!

In fact, the seven-days REGENERATION of Genesis is not the only such event in the Holy Bible. There will be another such "creation" of the heavens and earth after the Great Tribulation and before the one-thousand-year reign of the Lord Jesus Christ (see: Isaiah 65:17-25 & Jeremiah 4:23-26). And the Lord Jesus even defines this occurrence as a "REGENERATION":

"And Jesus said unto them, Verily I say unto you, That ye which have followed me, in the regeneration when the Son of man shall sit in the throne of his glory, ye also shall sit upon twelve thrones, judging the twelve tribes of Israel."
(Matthew 19:28 KJV)

Can such things be explained or defended scientifically? No. Do such things contradict the known observations of physics and chemistry? To the extent we presently know them, yes they most certainly do. Consequently, there are some things that just cannot be explained by appeals to science; there are many things that must be accepted on faith because they are beyond the comprehension of man's canal mind.

"But Jesus beheld them, and said unto them, With men this is impossible; but with God all things are possible." (Matthew 19:26 KJV)

The evidence of the global destruction and death of things in the old world that was here, before the regeneration of seven-days of Genesis, can be found today in the Earth's geologic record. On the next page we present detailed accounts of observations concerning this evidence.

Observations of Geologic Evidence for the Death of the Ancient World