Understanding the Biblical Difference between the Words "World" and "Earth" 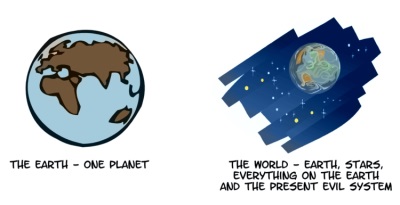 The King James Authorized Version of the Holy Bible has its own internal set of words and definitions which are self-interpreting in their specific meaning and context. From Genesis to Revelation, translated from Hebrew, Aramaic, and Greek manuscripts, the KJV Bible's English translation is an integrated whole throughout the sixty-six books.

The English words "world" and "earth" are different words and have distinct, separate conceptual meanings in the Holy Bible and the English language. These meanings are defined by the Scriptures when used in context. Understanding this distinction is CRUCIAL to rightly-dividing the word of truth.

In the book of Hebrews, the Lord Jesus Christ is said to be the maker of the "worlds" (plural):

"Hath in these last days spoken unto us by [his] Son, whom he hath appointed heir of all things, by whom also he made the worlds;" (Heb. 1:2 KJV)

"Through faith we understand that the worlds were framed by the word of God, so that things which are seen were not made of things which do appear." (Heb. 11:3 KJV)

The Greek word in these two verses for "worlds" is αιων (as in eon), which means an age or a perpetuity of specific prevailing conditions in time upon the face of the Earth. Therefore, the word "world," as doctrinally defined in our Bible, is NOT referring to other planets in outer space but to defined ages and prevailing conditions during those ages on the Earth, be they past, present, or future.

The "Earth" is a planet. It is a spherical-shaped mass of matter in time and space. The "world" is the specific set of conditions prevailing upon the face of the planet Earth at a specific point in Biblical time. The Earth is a part of our present world, past worlds, and the future world to come (see Matt 12:32, Mark 10:30, Hebrews 2:5), but the Earth itself is not the whole "world." Our present "world" also consists of the stars in the sky, the trees of the field, the people, the cities of the nations and the present evil world system on the face of the Earth:

"And it shall come to pass after the end of seventy years, that the LORD will visit Tyre, and she shall turn to her hire, and shall commit fornication with all the kingdoms of the world upon the face of the earth." (Isaiah 23:17 KJV)

"Who gave himself for our sins, that he might deliver us from this present evil world, according to the will of God and our Father:" (Gal 1:4 KJV)

We'll use the example of the last "world" that will be on the face of the present Earth as an example. It is the future one-thousand-year reign of the Lord Jesus Christ in Jerusalem. It begins after He returns to Earth following the events of the Great Tribulation. That world is spoken of in the book of Revelation chapter 20. At the end of that "world" following the Great White Throne Judgment and the destruction of Death and the Devil, God will create a completely new and eternal heaven and Earth.

"And I saw a new heaven {single tense} and a new earth: for the first heaven and the first earth were passed away; and there was no more sea." (Revelation 21:1 KJV)

The future world of the one-thousand-year reign of the Lord Jesus Christ will be on the current Earth. But because the face of the Earth will be so decimated by the wrath of God during the Great Tribulation period, the Lord will regenerate the heavens and Earth to restore it for Himself, His Bride, the Jewish people, and those of the nations of the Gentiles found worthy to enter.

"And Jesus said unto them, Verily I say unto you, That ye which have followed me, in the regeneration when the Son of man shall sit in the throne of his glory, ye also shall sit upon twelve thrones, judging the twelve tribes of Israel." (Matthew 19:28 KJV)

The prophet Isaiah speaks of this regeneration:

"For, behold, I create new heavens {plural tense} and a new earth: and the former shall not be remembered, nor come into mind. But be ye glad and rejoice for ever in that which I create: for, behold, I create Jerusalem a rejoicing, and her people a joy. And I will rejoice in Jerusalem, and joy in my people: and the voice of weeping shall be no more heard in her, nor the voice of crying. There shall be no more thence an infant of days, nor an old man that hath not filled his days: for the child shall die an hundred years old; but the sinner being an hundred years old shall be accursed. And they shall build houses, and inhabit them; and they shall plant vineyards, and eat the fruit of them. They shall not build, and another inhabit; they shall not plant, and another eat: for as the days of a tree are the days of my people, and mine elect shall long enjoy the work of their hands. They shall not labour in vain, nor bring forth for trouble; for they are the seed of the blessed of the LORD, and their offspring with them. And it shall come to pass, that before they call, I will answer; and while they are yet speaking, I will hear. The wolf and the lamb shall feed together, and the lion shall eat straw like the bullock: and dust shall be the serpent's meat. They shall not hurt nor destroy in all my holy mountain, saith the LORD." (Isaiah 65:17-25 KJV)

Take note of the phrase ‘"the child shall die" which tells us there is still death on the Earth when the Lord Jesus Christ begins His reign for those one-thousand-years.

And death is not finally destroyed until the end of that one-thousand years:

Also take note of the phrase "for as the days of a tree are the days of my people" in Isaiah's prophecy. Trees can live to be a few hundred years old. This passage tells us that people born during the one-thousand-year reign of Christ will have extended lifetimes, because environmental conditions on the Earth at that time will be restored to similar as they were on the Earth before Noah’s flood. The phrase "the lion shall eat straw like the bullock" indicates that the animal kingdom will once again revert to vegetarian diets, also just like before Noah’s flood. And the serpent’s diet will remain the same as it was proscribed in Genesis 3:14.

"And the LORD God said unto the serpent, Because thou hast done this, thou art cursed above all cattle, and above every beast of the field; upon thy belly shalt thou go, and dust shalt thou eat all the days of thy life:" (Genesis 3:14 KJV)

The formation of this new heavens and Earth is also spoken of by the prophet Jeremiah:

Although the words "without form, and void" are the same words as that are spoken in Genesis 1:2 at the start of the seven-days of Genesis, the prophet is speaking of a future regerative event. We know this because of what else is said in the following verses:

"I beheld the mountains, and, lo, they trembled, and all the hills moved lightly. I beheld, and, lo, there was no man, and all the birds of the heavens were fled. I beheld, and, lo, the fruitful place was a wilderness, and all the cities thereof were broken down at the presence of the LORD, and by his fierce anger. For thus hath the LORD said, The whole land shall be desolate; yet will I not make a full end. For this shall the earth mourn, and the heavens above be black: because I have spoken it, I have purposed it, and will not repent, neither will I turn back from it. The whole city shall flee for the noise of the horsemen and bowmen; they shall go into thickets, and climb up upon the rocks: every city shall be forsaken, and not a man dwell therein." (Jeremiah 4:24-29 KJV)

In light of Jeremiah's words "without form and void" which denote a regeneration of the heavens and Earth, the Biblical interpretive 'Rule of First Mention' would suggest the same is true concerning the seven-days of Genesis and the formation of Adam's world.

Adam's world was pristine on the surface. But under Adam's feet, entombed and hidden in the rocks of the planet, was the buried fossil record - God's material testimony to the truth of the existence of a previous "world" on the face of the Earth and a long reign of death across ancient ages past, long before the new world of Adam. This material evidence, there all along but only scientifically examined and understood by man over the past two to three centuries, now speaks to us today about the existence of that previously-created world (Genesis 1:1), which came under subjection to death, was eventually destroyed (Genesis 1:2), and then Divinely replaced by the present world (Genesis 1:3-2:1).

For review purposes: The ancient world was under the stewardship of an "anointed" being, a spiritual creature called the covering cherub and named Lucifer. (See Isaiah 14:12-16 KJV and Ezekiel 28:13-17 KJV) Through Lucifer's sin of rebellion against God, the old world under Lucifer's stewardship was first subjected to Death and, through time, eventually perished. At the end of its time, when the stars of the old universe, including Earth's sun, perished, their remaining hydrogen gases oxidized into waters as darkness (both physical and spiritual) took its final toll upon the ancient Creation. That time is specifically what these two verses point to:

"For this they willingly are ignorant of, that by the word of God the heavens were of old, and the earth standing out of the water and in the water: Whereby the world that then was, being overflowed with water, perished: But the heavens and the earth, which are now, by the same word are kept in store, reserved unto fire against the day of judgment and perdition of ungodly men."  (2 Pet 3:5-7 KJV)

"These are the generations of the heavens and of the earth when they were created, in the day that the LORD God made the earth and the heavens," (Genesis 2:4 KJV)

In the New Testament, this second generation of the heavens and the Earth is specifically referred to as "The Foundation of the World" and it is likened to a "conception" in the Scriptures. This will be discussed in the next chapter.